The Keith F Nolan Classic is a Group 3 race for 3yo Fillies that generally takes place in March each year at Kembla Grange racecourse in New South Wales. The race is run over a distance of 1600 metres under set weight & penalty conditions and offers $200,000 in prize money. The 2020 Keith F Nolan Classic was taken out by Asiago from Shout The Bar with All Saints' Eve third.

Kembla Grange Racecourse is located around 95 kilometres South of Sydney on the Princes Highway and the Kembla Grange track is built almost identical to Randwick racecourse.

The Keith F Nolan Classic is a more than handy 3yo fillies event on the provincial circuit at Kembla Grange that tends to attract above average females each year which resulted in the race being upgraded to Group 3 status for the 2009/2010 racing season.

Fillies from this race will more than likely head on to the Group 1 Storm Queen Stakes on Golden Slipper day which is the ideal lead up race to the premier fillies event of the autumn, the Group 1 ATC Australian Oaks at Randwick.

This race has proven to be a good guide to feature fillies & mares races in recent times with Luvaluva (2018), Candlebra (7th in 2015), Arabian Gold (11th in 2014) and Royal Descent (2nd in 2013) all taking out the Group 3 Adrian Knox Stakes at Randwick after contesting this race. Royal Descent went on to win the Group 1 ATC Australian Oaks as well.

The best guide to this race of late has been the Group 1 Surround Stakes held during the Sydney autumn racing carnival in Sydney. Pohutukawa (2019), Slightly Sweet (2015), Zanbagh (2014) and Cameo (2013) all finishing unplaced in that race before tasting success in the Keith F Nolan Classic.

Pohutukawa (2019) ran fifth in the Surround Stakes over 1400m at Randwick before scoring a comfortable victory in this event for the James Cummings stable. Recent Keith F Nolan Classic winners include Luvaluva (2018) and Dawn Wall (2017).

Kembla Grange race track has a circumference of 2200 metres and a good size straight of 420 metres, with a track width of 25 metres. The Kembla Grange racecourse itself was built to the same dimensions as Randwick Racecourse and therefore suits horses who prefer bigger tracks and have the ability to finish a race off with purpose. 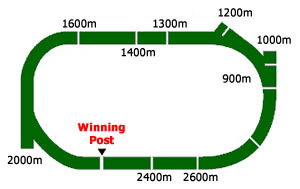 In 2011 the Keith F Nolan Stakes was held at Rosehill racecourse over a distance of 1800 metres due to Kembla Grange racecourse being unfit for racing at the time.

* Conditions apply to all bookmaker offers

Learn how to choose an online bookmaker, open an account, deposit funds, place a bet and collect your winnings.

Find out how bookmaker percentages allow bookies to frame a betting market to gain an edge over punters.

>>> Framing Your Own Market

Learn how to price a horse race and set your own odds by framing your own betting market.

What are the different types of racing bets? Learn about the most common horse racing bet types available in Australia.

What is a form guide? Find out how to read and understand a horse racing form guide.

What is the shortest distance a horse can win by? Horse racing winning margins and distances explained.

Unibet offers a top racing product with excellent fixed priced odds and unique member promotions. Punters can enjoy more than competitive odds for racing, while racehorse owners can are well catered for too.

Betting with bookmakers is subject to terms and conditions.